Native Americans also use sweetgrass for scenting the floors of their tents, and as part of ritual costumes. In Northern Europe (particularly Russia), sweetgrass is known as Mary’s Grass, and was strewn on church steps for Saints’ Days. It is also known as Zebrovka, Seneca Grass, Holy Grass, and Buffalo Grass. Sweetgrass is widely used by native peoples, especially in groups of the great plains, as incense in holy ceremonies.
Beautiful sweetgrass braids from Canada. These are collected by First Nations families for us each year (“First Nations” is the Canadian equivalent of “Native American”). Sweetgrass is considered sacred by many peoples of North America. The smoke of burning sweetgrass is said to purify and clear objects, places, and people. Braids are sold individually. Price reflects the cost of 1 braid, which averages about 24″ in length (because this is a natural product, size will vary 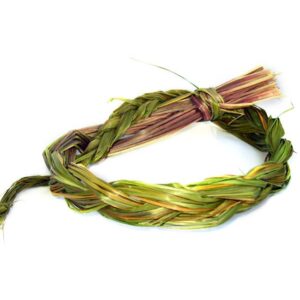 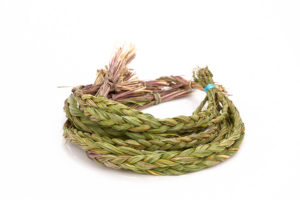 How to properly light your braid of sweetgrass:

There are no reviews yet.